You have no items in your shopping cart.
Menu
Customers who bought this item also bought

In the Embrace of His Mother prayer booklet by: Fr. Frank Pavone The prayer booklet In the Embrace of His Mother contains prayers to the Blessed Virgin Mary for the protection of the unborn. Addressing her under various titles by which she is honored and with reference to various Biblical passages, these prayers reflect on her “Yes” to the God who became an unborn child in her womb, and her consoling presence to all who suffer the wounds of abortion. 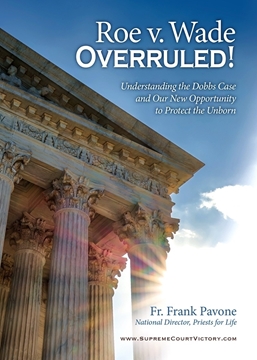 This 12-page brochure gives a very understandable explanation of the reasons the Supreme Court reversed Roe v. Wade and what this means for the future of the pro-life movement.
4588
$1.00

The Donkey That No One Could Ride 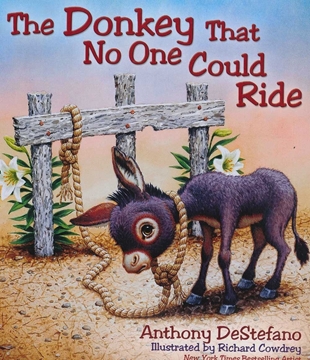 Tell the Easter Bunny to hop aside! From the author of the bestselling children’s book, Little Star, comes a brand new Easter classic: "The Donkey That No One Could Ride". With breath-taking illustrations by Richard Cowdrey, the New York Times best selling artist of the Marley and Me series, The Donkey that No One Could Ride tells the tale of a weak and useless donkey whose life is transformed after meeting Jesus and learning that all things are possible if only he believes. It’s a message sure to resonate with the children who hear the story and the adults who read it to them. Christians looking for an Easter story that goes beyond chocolate bunnies and dyed eggs will be thrilled when they open this classic tale by Anthony DeStefano.

Click here to View a video reading of this book.

DeStefano finds a fresh take on the events that lead to Easter. Using a small scriptural reference to the unridden donkey that Jesus rides in triumph into Jerusalem, DeStefano imagines a transformative relationship between a small, weak donkey and a figure who gives him strength and asks him to have faith. The text’s rhymes (“No matter how much he tried or he cried/ This was a donkey no one could ride”) make for easy read-aloud. Cowdrey’s illustrations focus on the donkey, conveying the development from initial lethargy to the donkey’s energetic and confident strength. It’s a welcome change from Easter chicks and bunnies. Ages 5–up. - Publishers Weekly